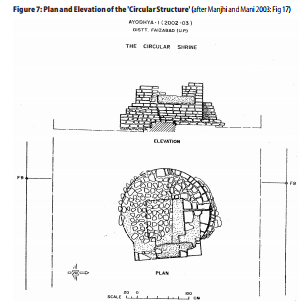 This article was written on the invitation of the organizers of a seminar on “Destruction and Restoration of Cultural Property” held from 3-7 May, 1998 in Croatia as Inter-Congress of the World Archaeological Congress (WAC). The article was not published in the proceedings of Croatia seminar. I was told by some friends in the WAC that the article was not included in the proceedings because it very strongly indicted the WAC office bearers and its executive for maintaining a double standard when it came to heritage and cultural properties issues. In the cases dealing with the people around the world the WAC was siding with those whose heritage sites and the cultural and religious properties have suffered at the hands of others or have been taken away from them even in the remote past. But curiously in the case of India and the Hindus the WAC is taking totally opposite stand. The victims themselves are being accused of the crime and being put on trial for it. As can be seen, the article traces the heritage policies of WAC through its own publications, resolutions and minutes of the meetings to show that if WAC is true to its policies, its resolutions and its minutes of the meetings then it has no other alternative but the plead the case of Hindus for the restoration of their heritage and cultural property.

In India the most dominant issue for the last twenty years has been the Ayodhya. It has engulfed virtually all walks of life and has even been deciding the fates of successive Governments. The issue involved is fairly clear one. Hindus say that the place where Babri mosque stood is the birthplace of Lord Rama 1 and the mosque was built after demolishing the temple in 1528 by the orders of Babar. The opponents of this claim say that there is no proof for this.  However, Ayodhya issue has never been a matter of just an ordinary temple or a mosque but a far larger issue in terms of sacred site, sacred place, cultural property, and religious heritage. Thus, the issue should be addressed in a much larger context. In the present paper an attempt has been made to see Ayodhya issue in the framework and policies of World Archaeological (WAC) rather than as an isolated and localized problem.  Though the issue is now well known world-wide and most of the scholars are well aware of the problems involved, in order to put this paper in perspective I shall briefly narrate the problem and then take up the these in the context of WAC policies and what WAC considers legitimate and reasonable through its various publications and more specifically the editorials written by the General Editor of the WAC Series who is not just the General Editor but also the founder and leading light of the World Archaeological Congress and its policies. In discussing the problem I have deliberately avoided a detail anthology of who said what. I have concentrated only on the issues rather than listing the supporters and opponents, their publications and their views as there will be many paper which shall be doing this.

The Issue  Ayodhya today is a small town near the district headquarter of Faizabad. Hindus believe (not as a story but as a part of their religious faith) that in distant past Dasharatha ruled over this region with his capital at Ayodhya. His eldest son, Lord Rama, was born in Ayodhya. Lord Rama is believed to be the seventh incarnation of Lord Vishnu 1 and due to this his birthplace is a sacred and revered place for Hindus.  To mark the birthplace a temple was built and rebuilt from time to time. The last time a temple built by a Gahadvala king in the11th century A.D. This temple is said to have been destroyed by the Mughal king Babar during his campaign in 1528 A.D. and a mosque was built thereon. The Hindus have been, since then, trying to reclaim the place on the ground that this is sacred place for them and should be restored to them so that they could rebuilt the temple marking the birth place of Lord Rama. However, the opponents of such a demand say that there is no proof to justify such a claim. While on the one hand claims, counter-claims, court cases continued among the people and the religious leaders, a debate regarding the validity of the claim and counter claim began among the historians, archaeologists and political leaders on the other. This led to the publications of a plethora of the material to prove and disprove the claims in virtually free for all and no hold-bar style. Meetings, parleys, court cases and debates went on and on without reaching to any settlement. Time passed and uneasiness of the people increased and then came the December 6, 1992 when a large number of Hindu devotees, who had gathered in Ayodhya for pilgrimage and kar seva demolished the mosque which was used as the temple since 1948.  Since then there has been complete lull on Indian scene except an abuse here a shout there and beating the breasts by those who have made the issue of “secularism” in to a profession without any sincerity and honestly to the cause. They termed 6 December as blackest day in the history of India. Also in this process of breast beating an entire community - namely the Hindus - have been branded as communal.  Now that WAC has taken up the issue by organizing a full day seminar on the issue, presumably leading to some suggestion or a resolution towards the end of Inter-Congress; in the same way it has done on the question of burial of dead or the sacred places and sacred sites of people in various parts of the world. Ayodhya very much comes under the purview of the Cultural Property, Sacred Site and Sacred Place, Sacred Space and the Site of Significance, as defined and pursued by the WAC.  The resolution passed in the Plenary Session of WAC-2 in Barquesemato, Venezuela on 8th September, 1990 is a remarkable document. The resolution reads as follows:

“That WAC acknowledges that the identification and conservation of sacred sites are of major concern to all the people of the world and that a meeting be organized under the auspices of WAC to explore the issues involved, with a view of drawing up an international accord on sacred sites, sacred places, sacred spaces and sites of significance.”   The publication of Sacred Sites, Sacred Places; Who Needs the Past; Conflicts in the Archaeology of Living Traditions; The Presented Past; Politics of the Past and several other volumes in One World Archaeology Series are important achievements. These and many other volumes in the series set the objectives and the goal of the World Archaeological Congress in clearest possible terms. These also set the parameters for the archaeologists, historians and the people of world.    Ayodhya: Whose Cultural Property, Whose Sacred Site, Whose Sacred Place and Sacred Space?  The opponents of popular Hindu belief and demand for the restoration of the birthplace to re-built the temple at Janmabhumi say: (a) that there is no proof that Ayodhya was ever a place of importance for Hindus and Rama was ever born; (b) that there is no proof that there was ever any temple which was destroyed to built the mosque; and finally (c) that if it is proved that the mosque was built at the Janmasthan after demolishing a temple, the Muslims shall gladly give the land to Hindus (When the mosque was standing, many Muslim leaders and intellectuals said that they themselves shall pull the mosque down to make the way for the construction of the temple).