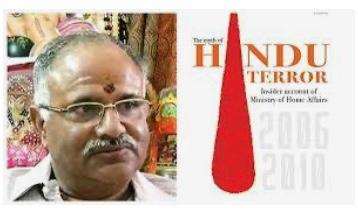 Very few books have been written on the challenging times that the officials involved with the internal security of the country faced during the governments of UPA I and II, a period also marked by serial blasts and terror attacks, including the 26/11 Mumbai terror attack. Officials involved in internal security were pressurised to bend to illegal, immoral political orders that suited the interest of the political dispensation—this led to irreparable damage to the country, like the 26/11 attack. It is in this context that the book “Hindu Terror: Insider account of Ministry of Home Affairs”, authoured by former Home Ministry officer R.V.S. Mani becomes important. Mani, who was posted in one of the most crucial departments of the MHA, the Internal Security (IS) division, from 2006 to 2010, has tried to focus on how MHA officials, under the direction of the then UPA political leadership, were forced to carry out orders that were morally wrong apart from being illegal. He says it was a time of “Hobson’s choice”, where the officer had to choose either to save himself or to save the country. It will be worthwhile to wait and see whether, or not, the scores of individuals who have been named by Mani, for not so flattering reasons, will respond to his accusations.

Mani, who took five months to complete the book, has bared open the plot in the initial pages, stating that “the so called secular narrative attempted to be propagated between 2004-2013 had the potential to tear India’s social fabric to shreds”. The rest of the book is filled with anecdotes, as one would expect from someone who has worked among spooks. He has substantiated the central theme of the book by quoting and attesting official records and incidents, some of which are in the public domain and many of which are not.

Unlike members of his clan, Mani has named political personalities, IAS and IPS officers. He has either indicted them for their wrongdoings or appreciated them, such as former IB officer Rajendra Kumar, whom he has mentioned multiple times and credited him for destroying several ISI sleeper cells that were flourishing in the country.

The book has been divided into 14 chapters. In one chapter, titled “Seeding of Hindu terror”, he has shared several anecdotes to prove how the Congress led UPA government had forced the MHA officials to manufacture a false narrative about the presence of “Hindu terror”. Mani mentions how he was summoned by the then Home Minister Shivraj Patil to his chamber and was asked to share information on terrorist attacks. At the time, two more individuals, whom Mani identified as senior Congress leader Digvijaya Singh and former Maharashtra IPS officer Hemant Karkare, were sitting there seeking information from him, while Patil sat in his chair totally unconcerned about what was happening. According to Mani, both Singh and Karkare were unhappy with his information that “a particular religious group was in most of the terror attacks”. This was in June 2006 and according to him it was during this time that the “first seed of the canard” that there existed Hindu terror was sown.

This promulgation of the theory of Hindu terror, according to the book, led to many knots among the various agencies that work under the MHA as agency people were asked to change the narrative from terror to Hindu terror. According to him, “At a time when we had the best team in the IS division , the attitude of the government in power and intent to cover every terror incident as ‘saffron’ and the ambivalence in acting against the real perpetrators of the terror attacks was making this country a cannon folder for those with evil designs against India”.

Mani says the most challenging time for him came during the time of the Mumbai attack as almost all the top officials of IS division were in Pakistan. According to Mani, this was all part of a design which has been explained in great details in the book. And with a less than adept Home Minister at the helm, which Mani has tried to prove by giving examples, the terrorists got crucial hours to “secure” themselves. In this chapter too he has named IAS officers, politicians and Bollywood personalities for playing a questionable role during and after the attack.

The behind the scenes developments in the MHA,  when the tragic attack was taking place, and when the post attack investigation started, which could only be known to someone who was in the inside, has been vividly mentioned in the book. It also talks about how credible inputs about an impending terror attack on Mumbai were not heeded to by the MHA due to intervention from “top political office” as a result of which it was the agencies and officials who got the blame for not being able to stop the attack. A full chapter has been given to the happenings in MHA when P. Chidambaram became the Home Minister. Mani shares how the initial two DGs of NIA were picked without following any due process and how the NIA acted as the personal favourite of the Home Minister and “big brother” to other agencies. According to him, the NIA introduced a non-existent “Hindu terrorism” concept. “In every case assigned to NIA they overlooked the first set of evidences and replaced it with the evidences supporting the Hindu terror narrative”.

It is worthwhile to mention here that senior officials with the NIA, with whom this correspondent used to interact during the UPA times, have admitted off the record that they had no evidence of any organised Hindu terror.

Perhaps, the most interesting part of the book is aptly titled “The whispering rooms”. In this chapter, Mani has included several incidents that will sound unbelievable at first but it will eventually sink in. Like how the CBI sat on requests by the Indian representative to UN when he sought evidence against Dawood Ibrahim which only the CBI had since the “political quarters, when P. Chidambaram was the Home Minister, were against providing any hardcore evidence against Dawood to the UN”.

He also writes about how an iconic property in Lutyens Delhi (which was 7, Race Course Road, the residence of the Prime Minsiter—Mani has chosen not to mention) was “sold” to an NRI.

He also writes about how an iconic property in Lutyens Delhi (which was 7, Race Course Road, the residence of the Prime Minsiter—Mani has chosen not to mention) was “sold” to an NRI.

Perhaps a more interesting part of the chapter, which will leave the reader wishing that some more pages were devoted to it, is when Mani narrates incidents regarding how our intelligence agencies stopped several terror attacks. Many of these incidents have not come out in the public domain before.

He has also written about how there are a set protocols, safeguards that the MHA carries out before any “surgical strike”. According to him, Mani received no such orders to implement these safeguards during 2006-2010, the time when UPA government says that it carried out surgical strikes. So did the UPA government actually carry out the strike? That is something the book leaves on the reader to decide.

“Hindu Terror: Insider account of Ministry of Home Affairs” is a recommended read for both laymen and experts who want to get a first-hand account of, among other things, how common political interference is in matters of national security.