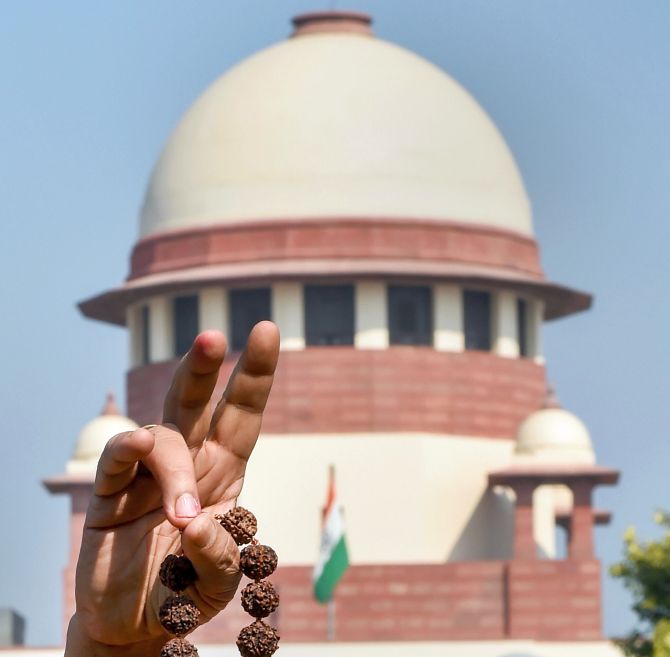 In the context of Ram Janmabhumi-Babri Masjid before the Marxist historians and the pseudo secularists took over the propaganda war with the help of some friendly news papers one of the most visible name in the new papers and on the other news media was that of Mr. Syed Sahabuddin who not only wrote on almost all the aspects of the Rama Janmabhumi and Babri Masjid issue but also was made to appear like the sole custodian of the Muslims in Indian. He then not only headed, now almost defuncked and forgotten, Babri Masjid Action Coordination Committee but also made various statements which were of significance.

One such statements was that the problem of Rama Janmabhumi was the creation of British rule in India under the policy of divide and rule and there is no truth whatsoever in the British period documents stating that the Babri mosque was built on Rama Janmabhumi after demolishing the temple. Mr. Syed Sahabuddin went on to say that that in Islam the building of Masque on the forcibly acquired land is strictly prohibited what to say about the land acquired after the demolition of a temple. He very categorically stated that if it is proved that the masque was built on the a place where earlier there was a temple he will not only give the lands to the Hindus for the building of a temple but also he will himself will demolish the mosque. His basic condition was that the testimony has to be other than British one.

Rama Janmabhumi: Muslim Testimony Many scholar took up the challenge thrown by Mr. Syed Sahabuddin and rovided the testimony independent of British documents. We shall discuss here a few of such evidences and the replies by the people concerned. Dr. Harsh Narain took up the challenge of Mr. Syed Sahabuddin and wrote an article in Indian Express (26.2.1990). We quote here the relevant part of the article. Dr. Harsh Narain wrote:

"All relevant British Government records followed by the District Gazetteer Faizabad compiled and published by the Congress Government in 1960 declare with one voice that the so called Babri Masque at Ayodhya is standing on the debris of a Rama Janmasthan temple by the order of Babar in 1528. Syed Sahabuddin, JNU historians, and self-styled 'secular' scholars and leaders are hotly contesting the proposition, contending that the existence and demolition of such a temple is a myth floated by the British in pursuance of their policy of 'divide and rule'. Syed Sahabuddin and many muslim divines go a step further and assert that neither nor any other Muslim for that matter would take it into his head to erect a masque by displacing a temple, for they argue, such a masque would not be masque in the he eye of the Shari'ah and would be liable to demolition by the Muslims themselves.